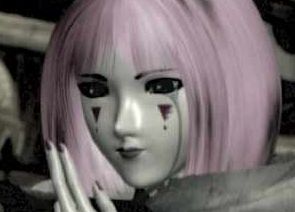 Every question known to man can be properly and concisely answered with the phrase “Malice@Doll is cool”, a phrase I truly began to appreciate about a month-or-so ago after an afternoon of assaulting my own once pure, prepubescent eyeholes with the strange, obscure-as-fuck indie masterpiece for which this post is titled. Written by the infamously cool dude behind Serial Experiments Lain, Chiaki J Konaka, and directed by the goofball known for his work on School Days of all things, Keitarou Motonaga, this three-episode OVA plots a pretty eclectic and meditative course through the bowls of an unnamed post-apocalyptic, post-human red light district where upon all the remaining robot citizens(?) are turned to Lovecraftian organic beings monsters through either magic, sci-fi disease or holy intervention (the show’s a bit unclear on this front).On the subject of not knowing what happens - by far, this is what I love most about the show, the way Konaka and Keitarou were able to pack as much cool unexplained shit in there as poosible while still having room for the philosophic – all of which is laying just under the surface of what is overwise a pretty normal story.

Over the course of this OVA Malice Doll, the main character, gets turned human somehow and, like king Midas, starts to spread her bullshit all over the place only for it to all go wrong as the mystic powers bite her in the ass later on. This story is pretty simple and I’m sure you could come up with other renditions of it from all over the mediasphere but, why it’s good in Malice@Doll is mostly because of how the story is used as a vehicle for examining the themes of chaos, corruption, passion, purpose, natural impulse and – most importantly, I think – what, if anything, can define humanness or personhood. Like most great shows - even those that recycle from ancient myth - what makes this enjoyable is in the telling not necessarily in the words being told. This isn’t to say that Malice@Doll holds nothing of note in a literary context but more so that the writing or the plot aren’t the obvious things to be wowed by.

I’m starting to talk about aesthetics so let’s rip the band aid off right now. Many people, I suspect, might watch this show and think something along the lines of ‘WOW! This looks bad!’. To me, the visuals are fine – great even, at times. I was never distracted by the plastic-ie-ness of the characters or setting nor the rather janky animation. In fact, I’ve never been all that bothered by the ‘god awful’ CG animation of the early 2000s and late 90s that so many people seem to adverse to (look at something like the Animatrix after all). If this kind of animation and art style does bother you then I suggest looking at it from a macro perspective and concocting some reason why it’s all right: The wonky character movements and stiff designs only serves to highlight the fundamentally artificial nature of an all robot town devoid of real human life or lasting purpose. It could be that, as the crude reflections of true humanity that the robots represent, they could only exist in a state of rigidity and inharmonious jank or that the lack of any conventionally visually pleasing elements belies the age and decay of the setting. ¯\_(ツ)_/¯

When talking about this show’s distinctions between robot and human – it’s clear that the two sides are meant to explore the concepts of essentialism vs existentialism. The robots are essential creatures who act according how they think robots should act. Malice Doll, when asked if she’s upset replies with “no, because I am a doll”. Of course, this social order is disturbed when Malice becomes evidently human - her essence has now changed and therefore she is forced into the existentialist role, the catalyst for most of the show’s conflict. OfCourse, in most places, the idea of essentialism – or any ideology that seeks to determine your worth and life choices even before birth – seems pretty freakin’(gotta remember it’s a solemn Christian child-friendly blog I’m runnin’) unfair and sketchy to most people. That seems to be the direction Malice@Doll takes as well evidenced by the complaints of the dolls who, now that their world is one without humans to service, find their essence unneeded and so their lives(?) un-regarded. So, existentialism is good right? Choosing your future, having autonomy - all good things, right? This is another cool aspect of the show and Konaka’s message therein. Instead of going full-on too cool for school and blasting freedom messages at you, Konaka recognises the pretty dangerous role individuals can play in fuckin(whoops) shit(whoops) up like the cunts (there go all the hot MILFs who are super into child-friendly content for their child-friendly children) they are. Everything spirals into chaos due to Malice’s actions and eventually only she has the ability and willingness to stop it – sacrificing herself and ascending to a Lain-like state of metaphysical omnipresence in the process... that’s pretty good, right?

This is the last thing I wanted to talk about in this post: The Ending. Like most interesting endings, there’s an necessity to re-watch before you can really begin understanding how things play out and how the world of Malice@Doll works. Even when that’s done, you, the audience member, have the fun of parcing through everything you know and everything you don’t and trying to form a cohesive picture out of all those – not entirely – disparate elements. I for one found it pretty fun combing through the show and think on what everything means and all the remaining questions like, ‘does god exist in the Malice@Doll universe?’ and ‘if god does exist in the Malice@Doll universe, does that mean that all the humans were raptured?’ or ‘what’s up with that ghost girl then, Malice turned into a being that looked sort of like her so, does that mean it was the ghost girl who tentacle raped Malice into becoming human in the first place? Does it mean, Malice was never fully robot since now she’s a ghost? Does that mean all the robots can become ghosts? If everything’s back to normal, does that mean Malice created another universe and also wouldn’t that mean that Malice’s universe was created by the ghost girl?” etc, etc.

In conclusion, Malice@Doll is cool.

P.S. Malice@Doll is a three-episode OVA. The whole thing can be found on Youtube (as of right now). Here is episode 1.

This was meant to be a Malice@Doll series and I’ve already got the first actual video planned but I’m a hack so I don’t know if it’ll ever be finished though, in the words of a wise man, “nothing is ever dropped until I’m dead”.